Eugene Pierre Francois Giraud (1806-1881). Giraud enlisted at the Ecole des Beaux-Arts on 29 August 1821 and received his training under the tutelage of Professors Hersent and Richomme. He won the Prix de Rome for engraving in 1826, followed by two medals for painting in 1833 and 1863 and on 4 May 1851 he was decorated with the Légion d'honneur and in 1866 he rose to the rank of officier. He was a constant figure in the Salon between 1831 and 1866 and exhibited paintings mostly in the historical genre. He was a vibrant personality in the contemporary Paris art scene and he had numerous imperial commissions. A large oval pastel of La princesse Mathilde by Giraud is now housed in Chateau Compiègne, and another large painting entitled Portrait d'Armand-Joseph, Admiral Bruat now hangs at the Châteaux de Versailles et de Trianon. There exists a plaster bust of Eugène Giraud by Jean-Baptiste Carpeaux now in the collection of Musée des Beaux-Arts in Valencia. Additionally, twenty six letters addressed to Giraud are currently housed in the collection of the Getty Research Institute. These letters are mainly from the artist's patrons and friends, such as the Baron and Baroness de Serlay, Chalons d'Arge, the sculptor Luigi Vimercati, Alfred Junot, Ferdinand Herold, Jacobo Luis, the painter Emile Lassalle, Charles Nisard, and Amadée Larrieu. 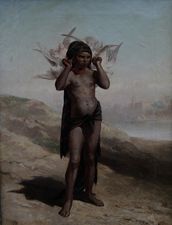