George Sherwood Hunter (1846-1914) - was born in Aberdeen on 30 May 1846.  He first visited Newlyn in the 1890s, staying at Belle View in 1897. In 1902 he settled at the Malt House, Newlyn, with his wife Constance. Hunter had a studio in Bateman’s Meadow, where the Forbes School of Painting was situated and Hunter assisted with tuition at the School in its early days. In Mrs Lionel Birch’s 1906 biography of the Forbes’ she wrote, ‘R and Mrs Forbes feel that they owe a debt of gratitude to Mr G S Hunter, an artist of sincere and thoughtful individuality who is always ready to help and supplement the teacher’s efforts. His own studio…is a perfect treasure-house of beautiful and interesting work.’ Like other Newlyn School artists, Hunter travelled widely, including to the Middle East where he painted a large oil depicting the wailing wall in Jerusalem, currently held by Plymouth City Museum and Art Gallery. Penlee House’s only painting by him was executed whilst in Pont-Aven, Brittany, an area many other Newlyn artists had also visited. Hunter died on 18 June 1919 and Constance died just five months later. The couple had no children, so Hunter’s share in the meadow studios was left to his two sisters in Aberdeen. The Malt House was left to Hunter’s nephew, also called Sherwood. During his lifetime, Hunter exhibited a great many paintings, including sixteen works in the Royal Academy and over sixty at the Royal Society of British Artists. 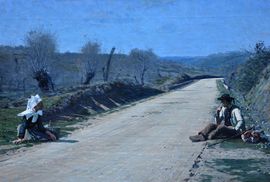