Robert Gemmell Hutchison RSA RSW (1855-1936) was a Scottish landscape artist, specialising in coastal scenes. He belongs to the school of British Impressionism. He was born in Edinburgh on 1 July 1855 the first son of George Hutchison, a brass-founder, and his wife Margaret Forman. He was educated in Edinburgh. After first training as a seal-engraver he was encouraged to pursue oil painting and trained under James Campbell Noble at the Trustees Academy on Picardy Place. He set up his own studio at 1 India Buildings (at the top of Victoria Street) in 1878 and was instantly successful, exhibiting at the Royal Scottish Academy in 1879 and at the Royal Academy in 1881. He shifted quickly from empty seascapes, largely of the Fife coast, to genre paintings, usually of young girls sitting on the coast. He was elected an associate of the Royal Scottish Academy in 1903 and a full member in 1911. He was also elected to the Royal Society of British Artists, the Royal Institute of Oil Painters and the Royal Scottish Society of Painters in Watercolour. His first one-man show in London was in December 1928 at Barbizon House, when 34 of his pictures were displayed. In later life he lived at 14 Craighall Terrace in Musselburgh, east of Edinburgh. He returned to Edinburgh in 1912, living at 8 St Bernards Crescent in the Stockbridge area. In the 1930s he spent time with his daughter at her home in Coldingham, painting at St. Abbs. He died at his daughter’s house on 22 August 1936. He is buried in Dean Cemetery on one of the curving paths to the south-west. His portrait is sculpted on the memorial by John Stevenson Rhind. 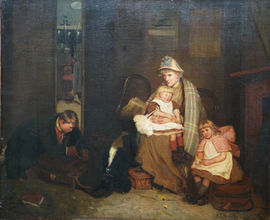