Leonard John Fuller ROI, RCA (1891-1973). Fuller was educated at Dulwich College and then studied at the RA Schools between 1912-14. He won the British Institute Scholarship in painting in 1913 and subsequently attend the Clapham School of Art.  During WWI, he became friends with Borlase Smart. After the war Fuller returned to study at the RA from 1919 to 1921.  During this time he married the artist Marjorie Mostyn, known as  Nancy, who was the daughter of the artist Tom Mostyn. From 1922-32 Fuller taught art at St John's Wood Art Schools.  He also exhibited at the Paris Salons where he was a Silver medallist.  Fuller also taught at his old school, Dulwich College from 1927- to 1937.  His friend from WW1, Borlase Smart, persuaded him to come to St Ives, and with his wife he established the St Ives School of Painting in1938. Fuller was also a Founder member of the Penwith Society of Artists. He painted a superb oil portrait of Terry Frost and Son which is part of the permanent collection of the Newlyn Art Gallery.

Full details of his important contributions to the St Ives art colony and to the crucial role he played during and after World War II is best found in Tovey (2003) pp94-6. Fuller died in St Ives. 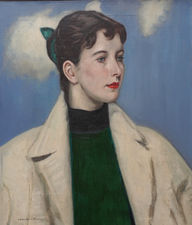