Frederick William Jackson (1859-1918)  was liked and respected in his day, praised as an artist and renowned for his landscape and marine paintings. It was generally felt that he could have achieved the distinction of RA had it not been for his reticence and modesty. (Jacobs, 1980)  He was born in 1859 at Middleton Junction, Oldham, one of three children, whose father was a photographer. His two brothers were Vincent Jackson, a musician trained at Leipzig Conservatoire, and Charles Arthur Jackson, an art dealer and Manchester gallery owner. Charles supported his brother during his career, helping with both money and materials. Many of Jackson's pictures bear labels inscribed with the address of his brother's gallery, 7 Police Street, Manchester. Jackson died in 1918, aged 59, and was buried in his native Middleton.
Manchester School - Jackson had relatively little formal training, however, his interest in painting was evident from an early age.  As a boy he went on sketching tours with his friend, the future architect, Edgar Wood. After leaving school he attended evening classes at Oldham School of Art, where he studied painting under John Houghton Hague (1842-1934). Hague's brother, Joshua Anderson Hague (1850–1916), was the leader of a group of young artists known as the 'Manchester School'. This group was making a considerable impact in the mid-1870s and Jackson was drawn towards them. Nearly all these artists had been trained at Manchester Academy of Fine Art and they met together in Wales in the early 1870s at the studio of the self- taught Joseph Knight (1837–1909). They were influenced by the Barbizon School of painters, mid-19th century painters who worked in and around the village of Barbizon on the outskirts of the forest of Fontainebleau, southeast of Paris, and also by Dutch painters, Anthonij (Anton) Rudolf Mauve (1838-1888) and Jozef Israëls (1824-1911), at a time when, in Britain, Dutch paintings were in demand. 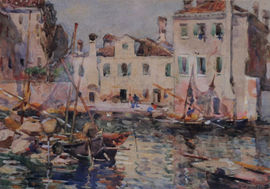