Watts also exhibited at the British Institution, Suffolk Street Galleries and at the New Watercolour Society. Watts lived in Hampstead from 1821, where John Constable (1776-1837) also lived, and, some twenty-five years older, was to have a marked influence on Watts’s style. Although it is not known that they ever met, Watts would undoubtedly have been familiar with his work and Hampstead was a relatively small town.

Watts painted landscapes throughout England and Wales, visiting north and south Wales, Derbyshire, Devon, Isle of Wight, Sussex and, of course, Suffolk and Essex. He painted many views around what is now north London and Middlesex and views on the Thames. Watts was highly successful in his portrayal of the English landscape and widely collected in his lifetime and throughout the twentieth century in Britain, Europe and North America. His work can be found in: London, Victoria and Albert Museum and The Tate. 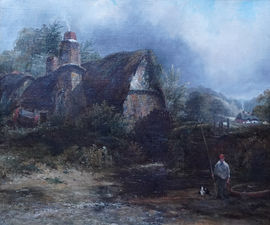 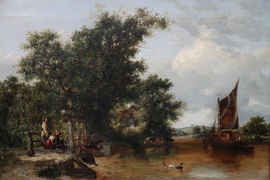 Pulling in the Creels 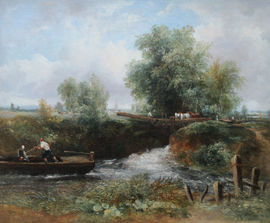 A Lock on the Stour 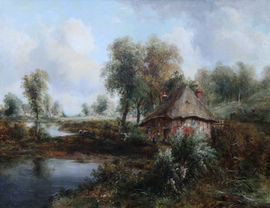