Francis Edgar Dodd RA (1874-1949) was a British portrait painter, landscape artist and printmaker. Dodd was born in Holyhead, Anglesey, Wales, the son of a Wesleyan minister. He trained at the Glasgow School of Art alongside Muirhead Bone who married Dodd's sister. At Glasgow, Dodd won the Haldane Scholarship in 1893 and then travelled around France, Italy and later Spain. Dodd returned to England in 1895 and settled in Manchester, becoming friends with Charles Holden, before moving to Blackheath in London in 1904.

During World War I, in 1916, he was appointed an official war artist by Charles Masterman, the head of the War Propaganda Bureau, WPB. Serving on the Western Front, he produced more than 30 portraits of senior military figures. However, he also earned a considerable peace-time reputation for the quality of his watercolours and portrait commissions. He was appointed a trustee of the Tate Gallery in 1929, a position he held for six years, and was elected as an Associate of the Royal Academy in 1927 and a full Member in 1935 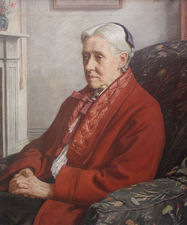