William Etty (10 March 1787 – 13 November 1849) was an English painter, best known for his paintings of nudesIn accordance with the wishes of his father, Etty served seven years of apprenticeship to a printer in Hull. He was, however, enabled to pursue his studies in painting through the generosity of his uncle, William Etty, who in 1806 invited him to London. In 1807 he entered the Royal Academy School, studying under Henry Fuseli, and he also studied privately for a year under Sir Thomas Lawrence, whose influence for some time dominated his art. His works are exhibited extensively in major British galleries. On his return to England in 1824, his "Pandora Crowned by the Seasons" was much applauded, and he was made a member of the Royal Academy in 1828. From this time he was very successful and attained a good competence. He resided in London until 1848, but on account of failing health he retired to York, where he died. He considered his best works to be "The Combat," the three "Judith" pictures, "Beniah, David's Chief Captain" (all in the National Gallery of Scotland, Edinburgh), "Ulysses and the Sirens" ( Manchester Gallery) and the three pictures of Joan of Arc. He is also represented in the Victoria and Albert Museum in London, and in English provincial museums; the Metropolitan Museum, New York owns his "The Three Graces," considered by many his masterpiece . "The Combat" was a large painting, over 10 feet in height and 13 feet in breadth. No buyer would purchase it until Etty's fellow painter John Martin acquired it for ₤300. Hung in Martin's studio, it was seen there by Lord Darnley, who then commissioned Etty to paint his "The Judgement of Paris." A statue of Etty, erected in 1911, stands in front of the York Art Gallery in his home town. Yet "He remains a neglected and underrated artist, one of the few nineteenth-century painters to paint classical subjects successfully." There is a life-size sculpture of Etty outside the York Art Gallery. Carved in Portland stone, it was sculpted by the local sculptor George Milburn, and unveiled to the public on 20 February 1911. The centenary of this event in 2011 was commemorated by the major retrospective (June 2011 - January 2012) entitled " William Etty: Art and Controversy ", with a book of the same name. Etty is also represented in one of the four roundels above York Art Gallery's entrance. The other roundels contain other famous York artists: John Carr (1723–1807, architect), John Camidge (1734–1803, musician), and John Flaxman (1787–1849, painter). Todd's bookshop at No. 35 Stonegate, owned by John Todd, was one of York's most prestigious bookshops. 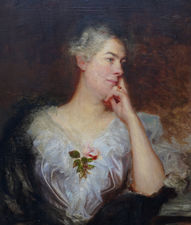 Portrait of a Lady with Rose