Edward Williams (1781 – 24 June 1855) - was an English landscape painter during the Victorian era. He had six sons, who were well-known landscape painters as well. Williams is considered the patriarch of the Williams family of painters, which is also referred to as the Barnes School.

Although 1782 is usually given for his birth date, Edward Williams was actually born in 1781 in London, and baptized 13 October 1781 at St. Mary's Church in the Lambeth district. His mother Mary Ward was a sister of James Ward, the well-known animal painter, and a sister of the equally well-known engraver William Ward. She was also a sister-in-law of the brilliant figure painter George Morland, and a sister-in-law of Henry Chalon, another animal painter. His father, also named Edward Williams, was an engraver who worked with the master mezzotint engraver John Raphael Smith, and ran with a notorious group of drinkers that included the aforementioned George Morland, and Thomas Rowlandson the caricaturist. As such, the younger Williams grew up surrounded by artists, of whom Ward and Moreland were two the best-known painters in Georgian London.

Edward Williams, junior was sent around 1792 or 1793 to live with his maternal uncle James Ward, R.A. (1769–1859), but it seems unlikely that he received any painting instruction from him. Instead he was informally apprenticed to a carver and gilder named Thomas Hillier, who had a shop on Carnaby Street. Ultimately young Williams did become a painter, yet not a figure painter like his uncles, but a landscape painter, which, given his heritage is surprising as this was an age when landscape artists were considered inferior to figure painters. Although he never attained the fame of his uncles, he was nonetheless successful enough to enjoy a comfortable living. More important though, he fathered six sons, all artists like himself, who carried on the styles of landscape painting that he taught them, and some of whom were among the most popular landscape artists of the Victorian era.

Most of Edward Williams' life was spent in or near the artists quarter associated with Tottenham Court Road in London, until 1846 when he moved his family to 32 Castelnau Villas in rural Barnes, Surrey. There he, his wife, three of their children, and some of their grandchildren shared a large house, with a carriage house in back that became their studio. Three of his older sons eventually moved to nearby houses, some virtually next door, with only his oldest son Edward Charles Williams remaining in London. Here in Barnes, close to marshes of the Thames River, and near farm fields and wooded estates, the Williams family lived and worked in a communal artist setting. The hundreds of skilfully painted landscapes, all similar in subject and style, that flowed from their Barnes studios under the tutelage of Edward Williams gave rise to the popular attribution of the "Barnes School" of artists. However, they are most commonly referred to more simply as the "Williams family of painters"

Edward Williams between 1814 and 1855 exhibited at the Royal Academy (36 works), the British Institution (21 works), the Suffolk Street Gallery of the Society of British Artists (38 works), and elsewhere. He often shared venues with his sons, causing some confusion with the public who had trouble telling one Williams painting from another. He is often called "Old Williams" to distinguish him from his oldest son, and he is referred to in some of the art journals of the time as "Moonight Williams", as moonlit scenes of the Thames were one of his favorite subjects in his paintings. He was predeceased by his wife, and he is said to have never quite overcome the grief at her death. He died on 24 June 1855 at the Castelnau Villas, and is buried nearby in the Old Barnes Cemetery. 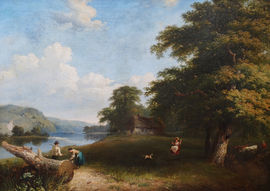