Edward Robert Hughes - Not to be confused with Edward Hughes (1832 - 1908), who specialised in portrait painting. Edward Robert Hughes RWS (1851 – 1914) was an English painter who worked prominently in watercolours, but also produced a number of significant oil paintings. He was influenced by his uncle and eminent artist, Arthur Hughes who was associated with the Pre-Raphaelite Brotherhood, and worked closely with one of the Brotherhood's founders, William Holman Hunt. Having settled on his career choice, Edward Robert Hughes attended Heatherley's in London to prepare himself for the chance of auditioning for the Royal Academy School. Hughes became a student at the Royal Academy School in 1868. While Pre-Raphaelitism played an influential part in shaping Hughes work, Aestheticism is also seen in his paintings. E.R.Hughes is widely known for his works Midsummer Eve and Night With Her Train of Stars yet he built a career as a portrait painter to the upper classes. In addition to being an accomplished artist himself, E.R.Hughes was also a studio assistant to the elder artist and Pre-Raphaelite Brotherhood founding member William Holman Hunt when Hunt suffered from glaucoma. Two of the paintings that Hughes worked on with Hunt were The Light of the World, which is displayed in St Paul's Cathedral, and The Lady of Shalott, which is exhibited at the Wadsworth Atheneum. On his own he experimented with ambitious techniques and was a perfectionist; he did numerous studies for many of his paintings, some of which turned out to be good enough for exhibition. Hughes held several important offices within the artistic community over his lifetime such as becoming a member of the Art Workers Guild in 1888, and was on their committee from 1895 to 1897. He was elected to Associate Membership of The Royal Water Colour Society (ARWS) on 18 February 1891, and he chose as his diploma work for election to full membership a mystical piece (Oh, What's That in the Hollow?) inspired by a verse by Christina Rossetti entitled Amor Mundi. His painting A Witch was given by the Royal Watercolour Society to King Edward VII and Queen Alexandra to mark the coronation in 1902. In later years Hughes served as the Vice-President of the RWS before leaving in 1903. Throughout his career, E.R.Hughes exhibited his works in several galleries around London: Dudley Gallery, Grosvenor Gallery, New Gallery, The Royal Academy, and toward the end of his career he exhibited with The Royal Society of Painters in Water Colours (RWS). His works can be seen in public collections including Cartwright Hall, Bradford, Cambridge & County Folk Museum, Maidstone Museum & Art Gallery, Bruce Castle Museum, Kensington Central Library, Birmingham Museum and Art Gallery, the Ashmolean Museum, Oxford, the Harris Museum & Art Gallery, Preston, and the National Trust for Scotland. Birmingham Museums Trust staged a retrospective exhibition, Enchanted Dreams: The Pre-Raphaelite Art of E.R. Hughes, from 17 October 2015 to 21 February 2016 at Birmingham Museum and Art Gallery. E.R. Hughes (known to his family as "Ted") was born in Clerkenwell, London in 1851 to Edward Hughes Snr. and Harriet Foord. He had one brother, William Arthur Hughes, who was two years younger than him, became a frame maker (gilder) and by 1891 a photographer. During the 1860's he lived for a time with his uncle Arthur Hughes and his family which included his son Arthur Foord Hughes, also an artist. In 1874 Hughes became engaged to Mary MacDonald, the daughter of the writer George MacDonald. Unfortunately Mary died four years later. In 1883 Hughes married Emily Eliza Davies. In 1913 they moved to St Albans, Hertfordshire, where he was later stricken with appendicitis. He died after surgery on 23 April 1914 in his home (no. 3 Romeland). 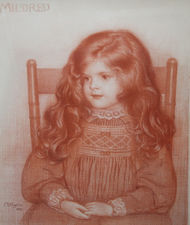 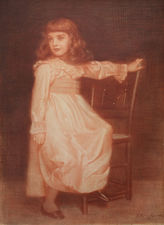