Denys George Wells (1881-1973) was born in Bedford, one of the six children of a cabinetmaker and Mayor of Bedford. He trained at the Slade School, London (1897-1903) under Henry Tonks, alongside Philip Wilson Steer, Orpen and Sickert and continued his stuides in Paris.
He was elected a member of the Royal Society of British Artists  in 1906 aged 25, winning the de Laszlo medal twice in RBA exhibitions; forty-nine years later he was to become Vice President of the Society.
He served in both the first and second World Wars, with the artists' Rifles in the former and as an Air Raid Warden in the latter. He was awarded the British Empire Medal for gallantry. He painted throughout both wars, documenting the destruction in London and continued to paint post war, known as 'The Recorder of London'. He also painted elsewhere in Britain, as well as in Venice, Rome, Amsterdam, Spain and Northern France.
He regularly exhibited at the Royal Academy, the New English Art Club, Bradford City Art Gallery, Brighton Art Gallery and the Royal Glasgow Institute of Fine Arts. Along with artists such as Orpen, Lavery and Sargent, he was commissioned to paint a miniature picture for Queen Mary’s doll’s house (Windsor Castle). He had a one-man show at the Mall Galleries in 1972,  a retrospective, entitled The Last of the Edwardians, was held in the same gallery shortly after his death. He received the Lord Mayor’s Art Award at the Guildhall exhibition of 1969, and the Queen’s Pension for his services to the Arts on the recommendation of the Prime Minister in 1958. A painting by Wells was given to the Prince of Wales at his wedding. He was still painting when he died at the age of 92. 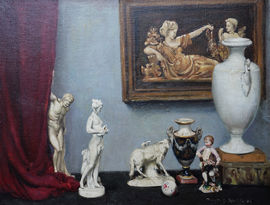