Henry Dawson (1811-1878) was a British landscape painter. Born in Kingston upon Hull, Dawson went with his parents to Nottingham when he was still an infant and always regarded the latter as his native town. His parents were poor, and he began life in a Nottingham lace factory. But even while engaged in lace-making he continued to find time for art, and used to paint small pictures, which he sold at first for about half-a-crown each. In 1835 he gave up the lace trade and set up as an artist, his earliest patron being a hairdresser in Nottingham, who possessed a taste for art. In 1844 he removed to Liverpool, where after a time he got into greater repute, and received higher prices for his works. In 1849 he came with his family to London, and settled at Croydon, where some of his best pictures were painted. Among these may be reckoned 'The Wooden Walls of Old England,' exhibited at the British Institution in 1853, 'The Rainbow,' 'The Rainbow at Sea,' 'London Bridge,' and ' London at Sunrise.' With the exception of six lessons from Pyne received in 1838, Henry Dawson was entirely a self-taught artist, and his art shows much originality and careful realism. He studied nature for himself, but he seems in later life to have been moved by Turner's influence to try more brilliant effects than he had before dared. Many of his works indeed are very Turneresque in treatment, though he can scarcely be called an imitator of Turner, for he had a distinct style of his own. Henry Dawson, though painting much, and selling his pictures for high prices in his later life, remained, strange to say, very little known except to artists and connoisseurs until the large and very interesting collection of his works that was made for the Nottingham Exhibition in 1878 brought him wider fame. He died in December 1878, at Chiswick, where he had for some time.

Exhibited at the Liverpool Academy; elected associate 1846, Member 1847. Whilst living in London, exhibited 28 times at the Royal Academy between1838-74, also at the British Institute, SS and Portland Gallery. 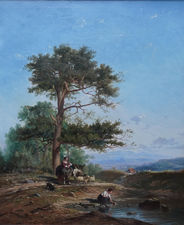 Women in a Landscape