David Foggie RSA (1878-1948), was a Scottish painter, son of James and Margaret Foggie. At the time of his death, David Foggie was a household name all over Scotland. Since that time he had almost sunk into obscurity, but enjoyed a revival in popularity with the 2004 Dundee exhibition of an extensive collection of his work. Foggie's works are found in the National Galleries of Scotland, the Royal Scottish Academy, and many public and private collections.

Foggie started his studies at the Dundee School of Art in 1887, where, 10 years later, he was appointed Pupil Assistant and joined the Dundee Graphic Arts Association. The following year he left for Belgium, where he studied at the Antwerp Academy. On his return in 1904 he built a house at Lucklawhill overlooking Leuchars and Balmullo in Fife, and in the following year helped found the Tayport Artists Circle. In 1920 he took a post teaching at Edinburgh College of Art. 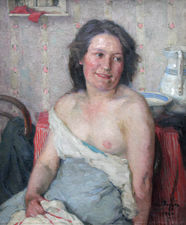 Portrait of a Woman Bathing 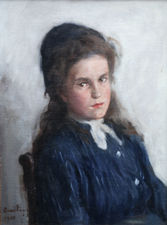 Scottish Portrait of a Girl