David Alison (1882-1955) was born in Dysrat, Fifeshire in 1882. He studied at Glasgow School of Art, where he won two travelling scholarships (the Haldane and Carnegie) for further study in Paris and Italy. In Paris, he became friends with his close Scottish contemporary, Francis Cadell, who introduced him to the other 'Scottish Colourist', Samuel Peploe.

Back in Scotland, Alison again teamed up with Cadell in the 'Society of Eight', a group of artists that attempted to span the artistic divide between Glasgow and Edinburgh. The 'Eight' included John Lavery, Patrick Adam and Peploe. Alison's portraits and moody, stylish interiors were something of an institution in the early to middle years of the last century: he exhibited over 40 pictures at the Royal Academy, double that number at the Royal Scottish Academy and was awarded a Silver Medal at the Paris Salon. 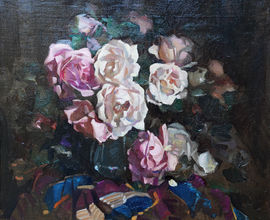