Charles Lees RSA (1800-1880) was a Scottish painter in oils of portraits, genre and landscapes.  Lees was born in 1800 in Cupar, Fife, Scotland. He began his career in art training under the eminent Edinburgh portrait painter Sir Henry Raeburn. He went to Rome for six months, and on return spent the majority of his career in Edinburgh, having his studio at 19 Scotland Street. Lees also taught drawing. In the 1830s Charles Lees, portrait painter is listed as living at 9 Elder Street in Edinburgh's New Town. Lees achieved initial renown as a portrait painter, his accomplishments leading to his election to the Royal Scottish Academy in 1830. He later served as the Academy's Treasurer. Skaters at Duddingston Loch (1854) made his reputation. In 1847 Lees completed his depiction of the 1844 grand match at St Andrews in an oil painting, The Golfers, which has been cited as being "the most famous golfing work of art in the world." Lees died in Edinburgh on 20 February 1880 and was buried with his wife Elizabeth Christie of Baberton, and their children, in Warriston Cemetery. The grave stands on the north side of the main east-west path in the upper section.
Exhibited Royal Academy 6 (1841-1857) including several portraits of nobilty and religious figures, Royal Scottish Academy 213 (1822-1880), and Glasgow Institute 12. Represented in the National Gallery of Scotland and the Scottish National Portrait Gallery 4. 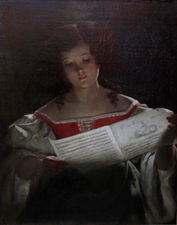