Alfred de Bréanski Snr. RBA (1852-1928) was a British artist born in Greenwich, London.  He was the oldest son of an immigrant family from Poland. He became a world renown landscape painter, particularly of Scottish and Welsh mountains and lakes, his landscapes often bathed in an unmistakeable atmospheric  Breanski golden light. Bréanski’s also painted landscapes of the Thames River where he kept a houseboat. He made his debut at the Royal Academy in 1872 and he continued to exhibit there until 1918. He also exhibited at the Royal Institute of Oil Painters and the Royal Cambrian Academy. His contemporaries were Lawrence Alma-Tadema and Walter Sickert as well as the French artists, Henri Fantin-Latour and Auguste Rodin. In 1873, Bréanski married Annie Roberts whom he met on his many painting trips to Wales and she was a talented artist in her own right. Thye went on to have seven children, two of which, Alfred Fontville and Arthur also become painters. Bréanski exhibited at the Royal Academy until 1918 and died 10 years later. The work of Bréanski is represented in several public collections including Southampton Art Gallery and the Laing Art Gallery, Newcastle-upon-Tyne. 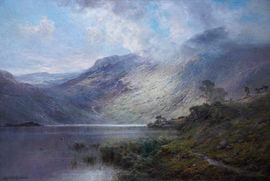