Frederick Samuel Beaumont (1861-1954). Born in Huddersfield and educated at the Camden House School, Brighton. Although winning the school drawing prize, he initially worked in a fancy goods warehouse in Brighton while continuing with his drawing.  A chance meeting with E Goodwyn Lewis persuaded him to change careers, and he studied at the RA Schools from 1882-88 (winning a silver medal in Life Study), and the Academie Julian, Paris.   He then spent time in France, Italy and Spain studying the Old Masters. He married and settled in Wimborne, Dorset. He was signed into the St Ives Arts Club as a guest of Alfred HARTLEY in February 1912, and settled in the town for a period during WWI (1916). He leased 9 Richmond Terrace in that year, and took a studio at Porthmeor. In 1918 he was elected on to the Lanham's Hanging Committee. In his later years he lived in Kensington, London. 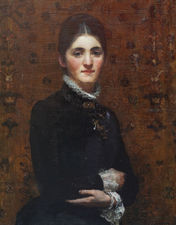 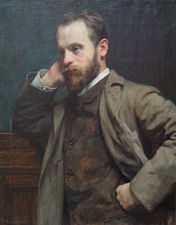