John Rankine Barclay (1884-1962) was born in Edinburgh. His father was a basket maker, and in the 1901 census Barclay, at age 16 was described as an engraver’s apprentice. He studied at the Royal Institution where he met A R Sturrock. Before the First World War he was a member of the Edinburgh Group of artists and re-joined the group after the conflict had ended. The group included J.G Spence Smith, D. M. Sutherland, William Oliphant Hutchison, William Mervyn Glass and A R Sturrock. E A Taylor wrote approvingly of Barclay’s work at the Edinburgh group’s Edinburgh Exhibition in 1919.  Barclay was awarded a Carnegie travelling scholarship in 1922. He painted in both oil and watercolor, frequently depicting figures in a landscape or a town setting in an individual and often experimental style. His work was exhibited at RSA, RA, RSW and Royal Glasgow Institute of Fine Arts. He moved to St Ives Cornwall in the late 1920's where he settled for the rest of his life.

Brian Bradnack was headmaster of Worcester College from 1938 for twenty-one years. He was appointed to sort out the finances after the difficulties of the 1930s and he brought a new discipline to the College. Not long after taking up office, Bradnack was faced with the difficulties resulting from the outbreak of the Second World War. Some staff were conscripted, and gradually food rationing and other shortages hit the school. Bradnack rose to the occasion, taking classes himself, supervising emergency food supplies, and encouraging the boys to take part in what he called the U.S.A. or Useful Services Association. (Taken from the History of New College Worcester). 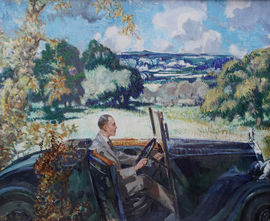 Portrait of Brian Bradnack, Principal of Worcester College, in a Motorcar, Malvern Hills