James Edward Barclay was born in London, studied in Italy and spent most of his later years in the United States. He lived and worked in NYC, Washington DC and Boston. His NYC studio was in the Alpine Building. At the time of his death he was working on the portrait of the Lord Mayor of Edinburgh. He died in Edinburgh Scotland on July 27, 1903
Source: Obituary, New York Herald, August 9, 1903
Exhibited: Royal Society of British Artists 1, Royal Institute of Oil Painters 1 and in the United States. 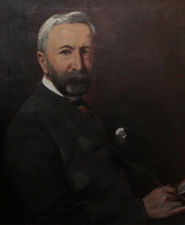