Frank Avray Wilson (1914-2009). Abstract Expressionist painter, printmaker and writer Frank Avray Wilson studied art in France and Norway and was the first painter in England to apply the techniques and methods of Action Painting and Tachism. In 1956 he helped form the New Vision Centre Gallery, which became a showcase for Modern and Abstract work. Avray Wilson came to Abstraction following years of scientific research into the source of human aesthetics. Once he discovered that colour is not matter but energy, that an image could be as alive as a living cell under a microscope, Avray Wilson reached full Abstraction during the early 1950s. His so-called 'vitalist imageries' are explosions of colour and shapes bursting into strength and liveliness. During the 1950s and early 1960s Avray Wilson enjoyed a celebrated status with no less than twelve one-man shows held at prestigious galleries in London (Redfern Gallery), Paris (Fricker) and Brussels (Helios). Since, his art has been firmly inscribed in Art History as ‘Tachist’, the European form of Action Painting. A true nomad at heart and naturally multicultural, Avray Wilson was universal in his thinking and his art-making, with a strong belief in the integrating powers of art. During a varied career Avray Wilson has been a lecturer and author, whose publications include 'Art as Understanding'. 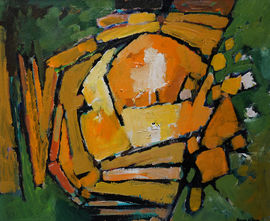 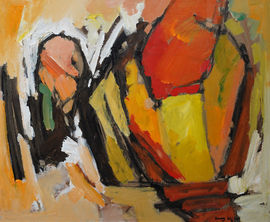