Arthur Hopkins (1848-1930) was born only eight years after Hardy and lived to the age of 82. Hopkins was the son of a prosperous marine insurance agent and was born in Stratford, London. He was educated at Lancing College in Sussex, and, after graduation, worked in a London office before entering the Royal Academy schools in 1872.

His brothers were also graphic artists: Everard (1860-1928) painted in watercolours as well; Edward was a black-and-white illustrator; and Gerard Manley was a fine draftsman (as well as a renowned poet).

Arthur Hopkins' genre scenes of country life are in much the style of another Hardy illustrator, Helen Patterson Allingham. He was a member of the rising generation of illustrators influenced by du Maurier and William Small, and, as Forrest Reid remarks, was "a good draughtsman, with "a strong dramatic sense, to which is added a sense of character". 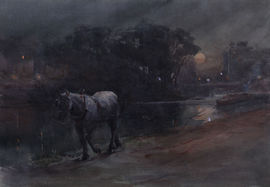