Anthony Devas (1911-1958) was a glamorous, accomplished and well-respected artist, specialising in charming and sensitive portraits and flower painting, especially in oils. He was born in Bromley, Kent, on 8.1.1911 and educated at Repton. He then studied at the Slade School from 1927 to 1930 under Professor Henry Tonks. There he was friendly with William Townsend and Geoffrey Tibble and others associated with the Euston Road School in the late 1930s. He also met there the writer and painter Nicolette Macnamara, whom he married in 1933.  Devas held his first exhibition in 1936, and many others followed at regular intervals throughout his career, including at the Royal Academy. He had one-man shows at Coolings Galleries, Wildenstein, Agnew’s and the Leicester Galleries and the Royal Academy Summer Exhibitions. The Queen visited one such exhibition in 1942 and purchased one of his paintings.

He became a member of the Royal Academy and in 1953 was elected an Associate. He was a member of the New English Art Club and of the Royal Society of Portrait Painters. He was also a committed member of the Chelsea Arts Club and wrote regularly in the press on the arts scene. During the Second World War he worked as a Fire Guard and Air Raid Warden in Chelsea, where he lived for most of his life. He established a reputation as a fine portrait artist and in 1957 he painted a portrait of the Queen for the Honorary Artillery Company. He has painted many other well-known subjects, including prominent members of society, the Church and the military.

He is represented in many public collections today, including the Tate, which has his portrait of Dylan Thomas’ wife, Caitlin, who was his wife’s sister. He also has works in The Imperial War Museum, The National Portrait Gallery, the Arts Council and numerous provincial city galleries. For much of his life Anthony Devas was regarded as a glamorous society artist. In her book “Janey and me; growing up with my mother” by Virginia Ironside, she gives details of the “interesting, wild and dangerous life” led by the “roistering set” of artists and intellectuals, of which Devas and his wife were part in their area of London. Her mother had, she reported, a sexual liaison with Devas and a portrait that he subsequently painted of her became one of the many canvasses purchased by Rowntree and Co. in the 1950S and used as advertising for the Aero brand of chocolate.  Anthony Devas died in London on 21.12.58. He died of a stroke following a long illness and is buried in Putney Vale Cemetery. He was just 47.

There was a memorial show of his work at Agnew’s in 1959, and further shows have since been held at Graves Art Gallery, Sheffield in 1991 and Tenby Museum and Picture Gallery in 1992. The editorial piece in the catalogue to the Agnew’s shows is written by his contemporary Christopher Sykes, who describes his handsome youthful looks and his “curious mixture of elegance and lack of convention.” He was passionate that paintings should be essentially representational and accessible to all. He loved life and had an irrepressible sense of humour. 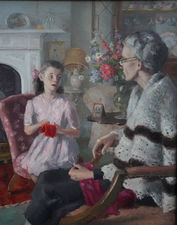 Portrait of Grandma and Grand Daughter in an Interior 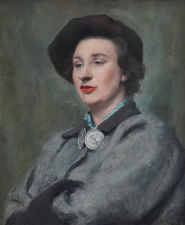