Maria Louisa Angus (1863 - 1934) was born in Southwark on 29th July 1863, the daughter of a printer.  She studied at the Lambeth School of Art in 1886 and established a studio at 1a Cowley Street in Westminster, later she worked out of Powers Studio in Ruskin House, Rochester Row. She specialised in genre subjects and some landscapes. She exhibited 10 pictures at the Royal Academy between 1888 and 1893 as well as many London Galleries and Societies. In 1913 she exhibited in the Anglo German Exhibition. Later in her life she taught art in Brighton, where she died on 11th February 1934.
Exhibited 1888-1912; Walker Gallery Liverpool, 7, London Salon 11, Manchester City Art Gallery 2, Royal Academy 10, Royal Society of British Artists 3, Royal Hibernian Academy 1, Royal Institute of Painters in Watercolours 10, Royal Institute of Oil Painters 1, Society of Women Artists 8. 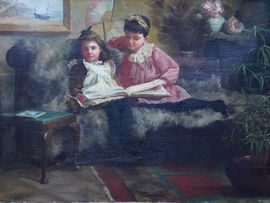