Alfred George Stevens (1817-1875) was born in Blandford Forum, a small market town in Dorset, into "humble circumstances," as one art critic puts it. His father was a painter of signs and/or heraldic devices, and house decorator, and the boy left the village school when he was ten to help him in the workshop. His talent brought him to the notice of the local rector, the Hon. Rev. Samuel Best, who sent him to study in Italy in 1833.

Although Stevens was only sixteen when he left, he travelled widely there and developed a passion for Italian art. He studied mainly in Florence and Rome, and at the beginning of the 1840s was employed in Rome as an assistant to the highly regarded Danish sculptor, Bertel Thorvaldsen.

After returning home in 1842, Stevens was given a tutorship at the New School of Design at Somerset House, which he held from 1845-47. From 1849-95, he worked for C. R. Cockerell on St. George's Hall, Liverpool, 1849-54. He also made designs for H. E. Hoole & Co., Sheffield, from 1850-57. This was a company specialising in bronze and metalwork, and during that time he also designed twenty-five lions for the British Museum's boundary railings (later dismantled). Then came his one major public commission: in 1856 he began work on the Wellington Memorial for St. Paul's Cathedral (twelve of the British Museum lions found their way to the railings around it). He would not live to complete his masterpiece. From 1860 he also worked on the decoration of Dorchester House, Park Lane for Sir George Holford (see British Sculpture 1850-1914). He died in 1875. 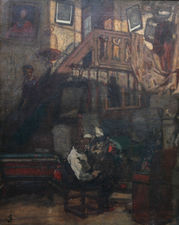 Self Portrait In Studio