Alexander Ignatius Roche RSA NEAC RP (1861-1921) was a Scottish artist in the late 19th century and an important figure in the “Glasgow Boys. He was born in the Gallowgate in Glasgow, the son of a milliner, Alexander Roche. He attended St Mungo’s Academy in Bridgeton, Glasgow.

He originally trained as an architect, but then changed to art, studying at the Glasgow School of Art and, from 1881, at L’Ecole des Beaux Arts in Paris. Here he studied under Gustave Boulanger and Jean-Leon Gerome. In his time here he befriended William Kennedy, John Lavery, Thomas Millie Dow and William Stott. In the early 1880s he joined a colony of Scots artists in Grez-sur-Loing south of Fontainebleau. On his return to Scotland in 1885 he joined with the Glasgow Boys working on murals for the 1888 International Exhibition. In 1888 he travelled to Capri where he befriended Fabio Fabbi and Harold Speed. In following years he visited both Venice and Florence, and married an Italian girl on the latter trip. This marriage was short-lived and they separated. As both were Catholics there seems to have never been any divorce.

In 1896 he moved from Glasgow to Edinburgh and began to distance himself from the Glasgow Boys. His work drifted from largely landscape to portraits.

In 1906 he remarried (possibly bigamously), to Jean Alexander, daughter of Robert Alexander. During this period they enjoyed the friendship of Joseph Crawhall.
From 1907 until 1914 they lived at 8 Royal Terrace, on Calton Hill, a very prestigious property. Around 1910 a cerebral haemorrhage caused the loss of use of his right hand and he had to retrain to paint with the left.

He died in Hailes Cottage, near the Water of Leith in Slateford, Edinburgh. He is buried in the Dean Cemetery in Edinburgh near the north-east corner of the original cemetery. 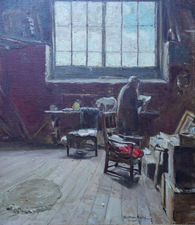