Thomas Sidney Cooper (1803-1902) was one of the foremost animal painters of the Victorian period. He was greatly encouraged by Abraham Cooper (of no relation) and Sir Thomas Lawrence. Cooper entered the Royal Academy Schools before taking up a position as a teacher in Brussels in 1829. It was here he became friends with the great Belgian animal painter Verboeckhoven, who greatly influenced his style. He was also influenced by the 17th Century Dutch School. In 1831 the artist settled in London and first exhibited at Suffolk Street in 1833. He exhibited forty-eight pictures at the British Institution between 1833 and 1863. ‘Landscape and Cattle’, Royal Academy 1833, was shown until 1902 without a break - a record for a continuous exhibit at the Royal Academy. Sheep and cattle were his most frequent subjects, although he did paint a few figurative subjects. His studio sale at Christie’s lasted three days from 12 to 15 April 1902. 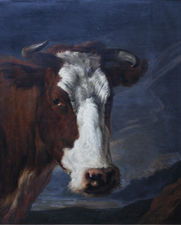 Head of a Shorthorn Cow Portrait